In the film we follow the artist Jan Wanggard and his crew in the challenging quest of bringing Roald Amundsen´s polar vessel “Maud” back to Norway, after more than 80 years at the bottom of the sea north of Canada.

Now they are bringing the wreck back to Vollen in Norway, where she was built. Will old “Maud” survive the journey?

Jan Wangaard and his crew inspects Maud during the summer of 2012. Foto: Jan W.

– We are glad that the new NFI consultant, Stine Skaret, chose our project in this round. This gives us the opportunity to document the process while we are working on the main financing. The reality does not rest, so this was really need fresh resources on the road, says producer and director, Hilde Skofteland. 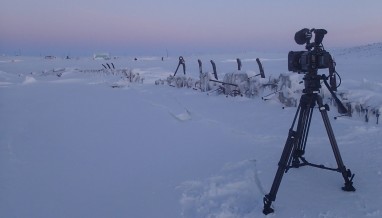 Maud in the ice, where she is resting in the Northeast Passage, north of Canada. Photo:: Lars Nilssen

As we speak, cinematographer and director, Lars Nilsen, is in the Northeast Passage filming in 30 minus degrees celcius. Jan Wanggard is in Cambrigde Bay, diving to document how Maud is where she is laying now, in the Arctic ice. Skofteland Film are present to film this process. Ice and snow has mostly covering “Maud” the last 80 years, and since this is the last winter “Maud” is experiencing like this, this is important to cover by the film crew.

In the film we will also learn about the original Maud expedition form 1917, with Amundsen and his men. There is tons of interesting material to investigate in this matter – just ask our researcher, Sven Arild Storberget, who is buried in old diaries from the crew members and film material as we speak, says Hilde Skofteland with a smile. Hilde´s own great grandfather was a part of the Maud-crew.

Link to the homepage of Jan Wanggaard: Maud Returns Home