Skofteland Film is happy to announce that the Italian-Norwegian coproduction LAST CALL has been awarded the Best Documentary in The House of Tomorrow international competition at Cinemambiente Environmental Film Festival 2013. 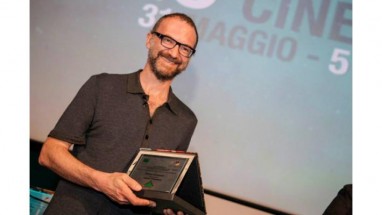 Enrico Cerasuolo with «The House of Tomorrow»award at Cinemambiente in Turin, Italy.

Producer Massimo Arvat, DOP Torstein Nodland and director Enrico Cerasuolo during the shooting of the film.

«LAST CALL – the untold reasons of the global crisis» tells the story behind the controversial bestseller «Limits to Growth» which made a stir when it was published 40 years ago. Strong players like Reagan, Thatcher and Exxon Mobile denied the warning that unlimited growth would harm the planet. Today the message is more timely than ever.  The film also looks into the future – what will happen in 40 new years – will we act by then?

The film will be screened at NRK and has received support from Freedom of Expression foundation and MEDIA.